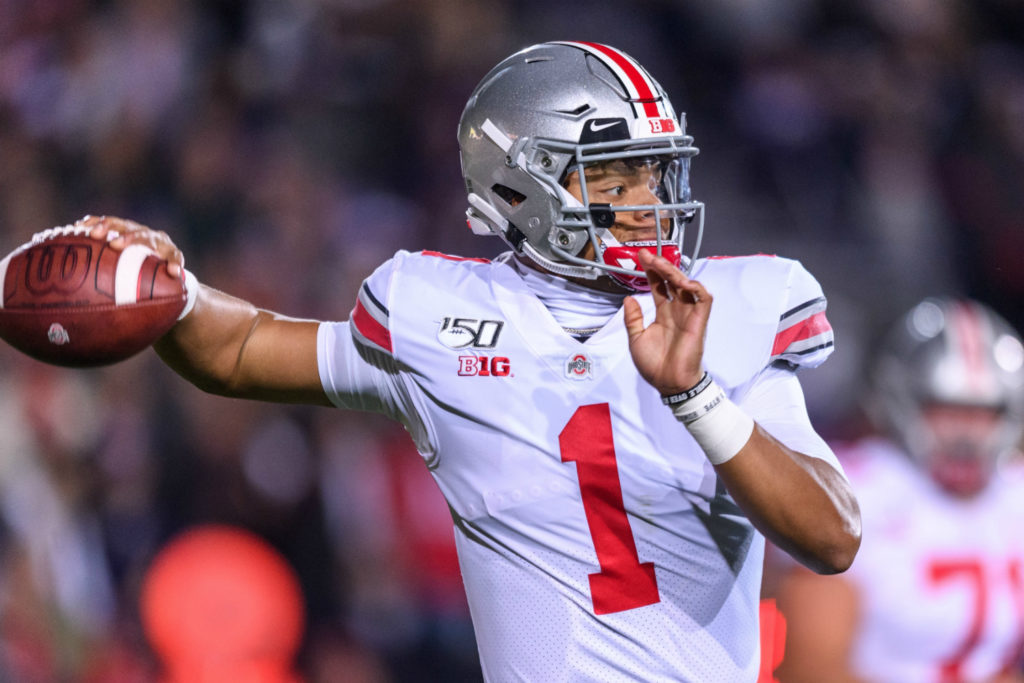 Welcome to a weekly in-season series looking at the coming weekend slate of college football games with observations and prognostications of varying degrees. This week, the playoff is either cut and dried or a complete mystery.

The 5 Playoff Darkhorses Who aren’t Dead

Baylor With Oklahoma and Texas still to come, the Bears can make their biggest impression at the end of the season. They’ll likely have to go unbeaten, but 12-0 means BU can be a win away from the playoff.

Auburn LSU is the first of a number of quality wins still on the table for the Tigers. They’ll most certainly have to win out, but you’d be crazy to keep them out of the playoff if they did.

Notre Dame Michigan this week might be the last signature win the Irish can score, but 11-1 with only a 5-point loss at Georgia is quite the resume.

Florida Only losing to LSU is going to look pretty good. Getting to Atlanta at 11-1 gives the Gators one more quality opponent and a solid playoff case.

Minnesota It feels like a pipe dream, but if the Golden Gophers can reach Indianapolis unbeaten, they’ll have picked up November wins over Penn State, Iowa and Wisconsin. They’d earn their playoff chance.

Iowa State The playoff is dead, but a Big 12 title and Sugar Bowl trip are absolutely a possibility for the Cyclones. The emergence of freshman running back Breece Hall has given the offense great balance, and the defense is one of the conference’s best.

Utah The Utes probably needed to go unbeaten to get to the playoff, but nobody in the Pac-12 South has been more consistent. Picking off Washington and Arizona in November give a well-rounded team the chance at the Rose Bowl.

Iowa Like their in-state rivals, the Hawkeyes have a pair of close losses and a lot to be excited about. They might not need as much help as you’d think to win the Big Ten West.

Texas A&M Kellen Mond’s struggles have shown up in losses, but there’s still a dearth of talent in College Station. The Aggies might still have an outside shot at the New Year’s Six, and they can certainly wreck havoc on the playoff picture with matchups with LSU and Georgia left.

Wake Forest When quarterback Jamie Newman’s on the field, the Demon Deacons are one of the nation’s best offenses. The ACC has fallen apart around them, but they’ve at least responded by continuing to win.

The Worst Team in Each Power 5 Conference

Georgia Tech The ACC is such a mess that everyone’s beating each other, meaning record alone won’t tell you what you need to know. Instead, consider that in the first year of teaching a program that ran the option for more than a decade to run modern-day offense, the Yellow Jackets have already lost to an FCS team and have a high-water mark of 28 points in a game. The struggles were inevitable, but it’s still bad.

Kansas Sure, this is a tale as old as time, but the Jayhawks only lost to Texas by a whisker. An inability to get any stops is the real serious weakness (allowing 32.6 PPG), but Les Miles is improving things.

Maybe the worst fake punt attempt ever. This, @PatMcAfeeShow, is not #ForTheBrand. Yikes. pic.twitter.com/X7Lcj4Yeef

UCLA The offense has had its moments, but the Bruins can’t stop anybody (allowing 34.6 PPG)

Rutgers This is actually a closer race in the Big Ten, as Northwestern has a historically bad offense. But the Scarlet Knights are anemic trying to move the ball (78 total points scored) and a sieve on defense (allowing 36.9 PPG). No one else will ever come close the title of #BUTTGERS.

The Worst Team in Each Group of 5 Conference

UConn The defense isn’t historically bad as was the case in 2018, but the Huskies still stink (38.1 PPG).

Rice The unquestioned worst team in all of FBS, as they can’t score points and still haven’t won a game.

Akron …but the Zips are giving the Owls a run for their money, going 0-7 and being even worse than Rice on offense (12.3 PPG)

New Mexico Close race with UNLV, but the Lobos get the edge for being slightly worse on offense.

South Alabama The schedule’s been tough with games against Nebraska, Memphis and UAB, but the Jaguars have their own problems scoring (16.3 PPG).

Miami (FL) (+5.5) at Pittsburgh An important game in the march towards the Orange Bowl, as the Coastal division champion would likely get that slot if Wake Forest falls apart. While it’s never pretty (like, at any point in history), the Panthers just find ways to win. Also, things might be looking up for the ‘Canes even after they found a way to lose to Georgia Tech, and we can’t have that. Pitt 34, Miami 31

Mississippi State (+10.5) at Texas A&M In an otherwise brutal schedule, these games are the type of gimmes that the Aggies desperately need. Texas A&M 38, Mississippi St 24

Illinois (+10) at Purdue It would be extremely on-brand for the Illini to follow up the upset of Wisconsin with an absolute dud, and Jack Plummer is starting to settle in well enough that the Boilermakers can stay in this game, but Lovie Smith’s team is heading in the right direction. Illinois 38, Purdue 35

Oklahoma (-23.5) at Kansas State Chris Klieman has the Wildcats doing all the right things in Year One, largely because the style of play on offense isn’t all that different from the Bill Snyder years. They’ll drag the game out enough to bog the Sooners down, but not enough to pull the upset. Oklahoma 38, Kansas St 17

Nevada (+14) at Wyoming Quarterback Sean Chambers has thrown for less than 800 yards this season, and the Cowboys just keep rolling along. Craig Bohl is a miracle-worker. Wyoming 28, Nevada 13

Iowa (-9.5) at Northwestern Because it’s who the Hawkeyes always have been under Kirk Ferentz, this game is no given. But man, the Wildcats just don’t score any kind of points. Iowa 17, Northwestern 3

Liberty (-7.5) at Rutgers This one’s here mostly to remind you that a baby FBS independent who got locked down by Syracuse is a ROAD FAVORITE in Piscataway. #BUTTGERS. Liberty 38, Rutgers 35

Wisconsin (+14.5) at Ohio State Yes, it all went horribly sideways for the Badgers at the worst possible time, but the defense is too good to not keep them relatively close. The problem is the lack of a playmaker at QB, especially compared to Justin Fields. Ohio St 27, Wisconsin 13

Tulane (+3.5) at Navy In the middle of a crowded American, the Midshipmen are quietly 5-1. But while the Green Wave didn’t show it against Memphis, they’ve still got what it takes to win the conference. They’ll get back on track. Tulane 31, Navy 28

Oklahoma State (+10.5) at Iowa State The Cylcones are rolling, and if Chuba Hubbard and Tylan Wallace wasn’t enough to be at Baylor at home, it won’t be enough in Ames. Iowa St 45, Oklahoma St 31

Indiana (+2.5) at Nebraska The Huskers are favorites on history alone. The Hoosiers might have a shot at 9 wins, and, in a surprising twist, they’ve been doing it with a pretty solid defense. Indiana 35, Nebraska 31

Texas (-1) at Texas Christian If you can almost lose a shootout to Kansas, your defense is bad enough to lose to anybody. But the ‘Horns just score so much, they’ll avoid embarrassment at least for one more week. Texas 45, TCU 42

Virginia (-3.5) at Louisville Another crucial game in the jumbled Coastal race, but also a big one in the Cardinals’ quest for bowl eligibility. The Cavaliers’ defense is still one of the nation’s best, but it can’t always bail them out. A similar showing from the offense as they had against Duke would be a huge boost. Virginia 28, Louisville 27

Penn State (-5) at Michigan State The Nittany Lions haven’t completely passed the eye test as a legit national championship contender. And those type of teams are extremely vulnerable against a team like the Spartans. Mark Dantonio drags the game into the mud and throws a serious wrench in PSU’s playoff hopes. Michigan St 24, Penn St 21

Maryland (+16.5) at Minnesota Same song, different week: if this isn’t the first loss for the Gophers, when? Minnesota 38, Maryland 37

Auburn (+10.5) at Louisiana State Bo Nix picked the worst time for his worst game in the loss to Florida. A similarly bad performance in Death Valley gives his Tigers no chance. This might be the first time this season we see Joe Burrow get significantly slowed, but War Eagle doesn’t have the firepower to quite pull off the upset. LSU 27, Auburn 24

Central Florida (-10.5) at Temple Another good one in the American. Remember UCF? They’ve been just fine since getting beat at Cincinnati, while the Owls are smarting after getting whooped at SMU. Sets up for a much better game than the spread would make you think. UCF 42, Temple 35

Boston College (+34) at Clemson The Golden Eagles managed to give the champs fits last season in a game where AJ Dillon struggled, so getting the star running back going would be a big boost. But this version of BC lost to Kansas handily, so yeah, the Tigers are fine. Clemson 42, Boston College 14

Missouri (-10) at Kentucky After an atrocious loss to Vanderbilt, it doesn’t matter how it looks. The Tigers just need to win to prove the road isn’t their Kryptonite. Mizzou 31, Kentucky 27

Arkansas (+31.5) at Alabama Pretty perfect week to sit Tua Tagovailoa with a bum ankle, as the Razorbacks aren’t scaring anybody. Alabama 45, Arkansas 10

Arizona State (-3) at California-Los Angeles The Sun Devils have shown us they tend to be ready for every opponent, so history is the real reason the spread’s so close. I think they respond well to a tough loss at Utah. Arizona St 38, UCLA 24

Notre Dame (EVEN) at Michigan The Irish’s playoff hopes cling to not losing again. But in a battle of strong defensive teams, it’s more a question of who possesses some explosive players on offense. That team isn’t ND. Michigan 21, Notre Dame 20

Utah State (+3.5) at Air Force Was tempted to throw Wazzu-Oregon on the list because nothing would be funnier than the Cougs wrecking the Pac-12’s last playoff hope, but the Ducks have shown us enough to feel like they’ll win even in a wild shootout. Instead, turn your attention to a fun matchup in the Mountain West and another chance for Aggie QB Jordan Love to show why he’s one of the best signal-callers you’ve never heard of. Utah St 28, Air Force 21

California (+21) at Utah MANBALL EXTRAVAGANZA (AKA neither offense is moving it well enough for this to be an entertaining game). Utah 17, California 7