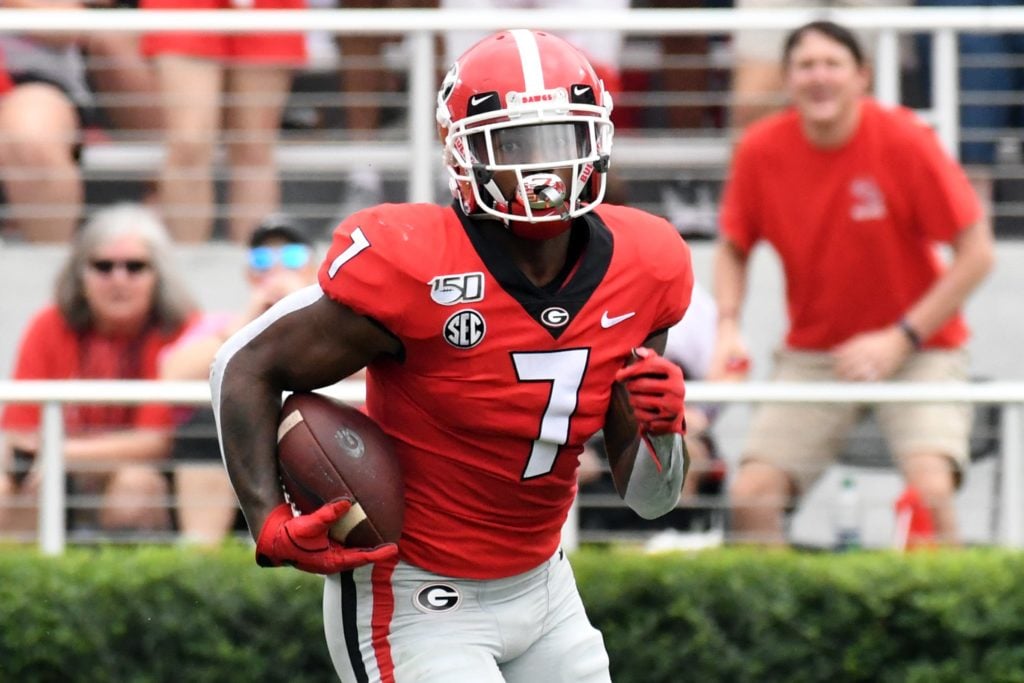 Welcome to a weekly in-season series looking at the coming weekend slate of college football games with observations and prognostications of varying degrees. This week, the biggest weekend of the year can wait, for right now (puts on Marvin Gaye), let’s slow waaaay down.

5 Teams that Will Beat their Vegas Win Total

Air Force (6.5) The Falcons stomped a quality Utah State team to get to 6-2, and they still have an outside chance at winning the Mountain West’s Mountain division.

Stanford (6.5) Quarterback K.J. Costello returned to help the Cardinal roll past Arizona. Despite sitting at 4-4, Cal and Colorado are winnable games that would get them to a bowl, and they could knock off Wazzu to hit the over before then.

UCF (9.5) Despite the early losses to Pitt and Cincinnati, the Knights have 6 wins already, and the toughest game left on the schedule is Tulane. They should get there before the bowl.

Kansas State (5.5) Chris Klieman is a new-age Bill Snyder and a perfect fit in Manhattan. The Wildcats’ upset of Oklahoma means they can afford a loss they shouldn’t normally take and will still hit the over.

Tulane (5.5) The Green Wave hit a snag the last few weeks by running into the best of the American. Luckily, Tulsa comes to New Orleans this week, and a win would make six.

UCLA (5.5) Back-to-back wins give the Bruins hope, but they’d need to win three of the last four to get to a bowl and hit the over, and there’s enough teams that they won’t get a bowl invite at 5-7. USC likely does them in.

Nebraska (8.5) I made the comment in the preseason Terrific 12 that the Huskers were the riskiest team you could believe in. Fast forward to the “lost to Indiana at home” present, and, well, yeah.

Army (8.5) What happened to the Black Knights? They lost a shootout with Tulane and haven’t won since.

Indiana (6) Already 6-2 with only losses to Ohio State and Penn State, #9WINDIANA is in full effect.

5 Receivers who Could Win the Biletnikoff

Sage Surratt, Wake Forest The big sophomore has been impossible for ACC corners to stay in front of, and he’s taken advantage to the tune of 9 touchdowns and the fifth-most yards in the country (881).

Tylan Wallace, Oklahoma State He’s been every bit the star he flashed last season, and the Cowboys have needed every one of his 903 yards.

Omar Bayless, Arkansas State The nation’s leader in yards (1,070) and TDs (12) is also fourth in receptions (60). Nobody’s been better on paper, and playing in the Sun Belt shouldn’t be held against him.

Gabriel Davis, UCF The biggest reason the Knights continue to sizzle on offense is the 6’3″ junior’s 50 catches, 916 yards and 10 scores.

CeeDee Lamb, Oklahoma Nobody does more on less touches. The star Sooner junior has only needed 36 catches to rack up over 800 yards and the second-most TDs in the nation (11).

5 Pass-Rushers who Could Win the Bednarik

Patrick Jones, Pitt Start falling in love, NFL fans. The Panther junior is a prototypical edge-rushing menace at 6’5″ and 260 pounds. He’s powerful and plenty fast, and he has a great sense of how to use his hands, particulary when it comes to rolling up 7 sacks and 4 forced fumbles.

Zack Baun, Wisconsin The senior outside linebacker gives the Badgers a tremendous threat on passing downs, but he makes all the plays, to the tune of 40 total tackles, 12 tackles for loss and 7.5 sacks.

James Lynch, Baylor Few are as effective as the Bears’ 295-pound nose tackle. Of his 19 total tackles, 11.5 have been for loss (tied for eighth in the country) and 8.5 have been sacks (tied-seventh).

Chase Young, Ohio State The clear winner, the Buckeye should be a Heisman finalist and maybe even win the dang thing to boot. He’s unblockable, and his 15.5 TFL, 13.5 sacks and 5 forced fumbles are a small example of how good he is.

West Virginia (+18.5) at Baylor Austin Kendall has been too turnover-prone against the Mountaineers’ best opposition to think he could orchestrate the upset. The Bears might not cover, but their playoff push will continue into November. Baylor 35, West Virginia 24

Georgia Southern (+14.5) at Appalachian State The Eagles have sorted things out after a sloppy start, but Eliah Drinkwitz has the Mountaineers purring in Year One. Hard to see a loss other than South Carolina next week. App St 35, Georgia Southern 17

Navy (-27) at Connecticut The Midshipmen have returned to their perch as the preeminent service academy in football. And the Huskies? They…also play said sport. Navy 45, UConn 10

Houston (+21.5) at Central Florida One week the Cougars almost lose to UConn, the next they nearly hand SMU its first loss. Hard to gauge this team since the D’Eriq King redshirt. What has been certain is the Knights are rolling along and probably aren’t slowing down, at least on offense. UCF 49, Houston 24

North Carolina State (+7.5) at Wake Forest Every game left is crucial for the Demon Deacons’ chances at the Orange Bowl and less-realistic playoff hopes. It would help both if they took care of an inconsistent Wolfpack with ease. Wake Forest 42, NC St 28

Boston College (+3) at Syracuse We got ourselves a mediocre-off. Who’s gonna blink first and do something halfway exceptional? Just take the best player on the field in A.J. Dillon, idk. Boston College 28, Syracuse 27

Michigan (-21) at Maryland Right when you think that the Wolverines have found their way, that’s when things tend to go awry during Jim Harbaugh’s tenure. The Terps make it hard, but like Illinois before them, they don’t seal the deal. Michigan 38, Maryland 28

Nebraska (-3.5) at Purdue This one. This loss would be the most hilarious in a season full of laugh-out-loud outcomes for the Huskers. Problem is, without Rondale Moore, the Boilers have not been willing to comply. Nebraska 31, Purdue 28

Virginia Tech (+17.5) at Notre Dame Another indictment of the ACC Coastal? The Hokies are 5-2 and likely going bowling, and there’s simply nothing that convinces you they’re any good. This is either the perfect bounce-back opponent for the Irish or the embarrassment your season is forever remembered for. I’ll take the former. Notre Dame 38, Virginia Tech 17

Kansas State (-6) at Kansas A Sunflower Showdown that matters…in football? The Wildcats put themselves back in contention to get the Big 12 title game with the upset of Oklahoma. But Les Miles has a flair for the dramatic, and derailing an in-state rival right after a big win is right up his alley. The Jayhawks make it tough, but K-State survives. K-St 27, Kansas 23

Army (+16) at Air Force Seriously, what happened to the Cadets? They’re squarely back in last place in the Commanders’ Cup. Air Force 38, Army 21

Florida Atlantic (+1) at Western Kentucky While Louisiana Tech and UAB are the cream of the crop in Conference USA, this one is for first place in the other division. Edge to the Hilltoppers, who handed UAB their only loss so far and have been a surprisingly solid defensive side (allowing 18.9 PPG). Western Kentucky 31, FAU 28

Texas Christian (+2.5) at Oklahoma State There will be points. The Pokes have the 2 best players on the field in Chuba Hubbard and Tylan Wallace.That’s all I got. Oklahoma St 42, TCU 41

Utah (-3) at Washington A slow weekend for the rest of the nation has some big showdowns in the Pac-12, including the Utes’ last serious test before a possible Pac-12 title game. If the defense can keep Jacob Eason from having a big performance like he did against Oregon, they’ll score enough. But I’d bet Eason has one more big day in him, and like Utah’s USC loss earlier this season, the Huskies are clearly the more talented team. Washington 28, Utah 27

Pittsburgh (-7.5) at Georgia Tech If someone has to win the Coastal, please let it be Pitt. I don’t care how we get there, just make it the Lords of Chaos. Pitt 35, Georgia Tech 24

Georgia (-6.5) vs Florida Oh yeah, that game. The ‘Dawgs might have figured out their offensive problems during the bye week. But I’ll believe it when I see it. It doesn’t seem to matter who’s taking snaps, the Gators move the ball enough on offense to keep up with the likes of LSU. They’ll do enough to outpace UGA and essentially wrap up the SEC East. Florida 31, Georgia 27

Alabama-Birmingham (+12.5) at Tennessee They shouldn’t be this heavy an underdog, but the Blazers were probably going to need to go unbeaten like App State to have a chance at a New Year’s bowl. This isn’t as good a team as Bill Clark has had the last few years, but they can still win C-USA and will make the Vols work for it. Tennessee 35, UAB 31

Mississippi (+19.5) at Auburn This would be a classic spot for the Tigers to fall flat on their face after a close loss to LSU. But, again, the underdog has to oblige a little, and that’s not happening with the Rebels this year. Auburn 45, Ole Miss 21

Northwestern (+11) at Indiana The ghosts of #CHAOSTEAM past might haunt the Hoosiers and make this a little too close for comfort, but this isn’t going to be the game that derails #9WINDIANA. Indiana 28, Northwestern 10

Oregon (-4.5) at Southern California Preview of the Pac-12 title game? It’s not crazy. It’s also the best shot the Ducks might have to lose before then. For now, at least, Justin Herbert will make enough throws. Graham Harrell’s first season calling plays has been a smashing success, and the Trojans will put some points on the board, but the win over Washington proved the Ducks can go score-for-score in a hostile environment. Oregon 45, USC 38

Virginia (-2) at North Carolina A big one in the Coastal. If the Cavs want to stay on top, they probably can’t afford another loss. Or maybe they can, because this division is a mess. Anyways, MORE CHAOS BECAUSE THE COASTAL IS TRAAAAAAAAAAAASH. UNC 27, Virginia 24

Southern Methodist (+6) at Memphis Big game in the American leggoooooooooooo. The Mustangs’ march to perfection has been wildly entertaining on top of carrying a stirring narrative about the “death penalty” program rising back up. But this will be the Ponies’ toughest test yet. The Tigers do a little bit of everything well and have stars like RB Kenneth Gainwell and WR Damonte Coxie who will make Southern Methodist earn it. It’s probably too much, and we’re likely headed for a Memphis-Cincinnati showdown in the American title game with the Cotton Bowl on the line. Memphis 41, SMU 38

Fresno State (+2) at Hawai’i Stay up real late and watch 2 quarterbacks with complete disregard for ball security. Jorge Reyna and Cole McDonald will throw to anybody, even if they’re on the other team. Hawaii 49, Fresno St 42