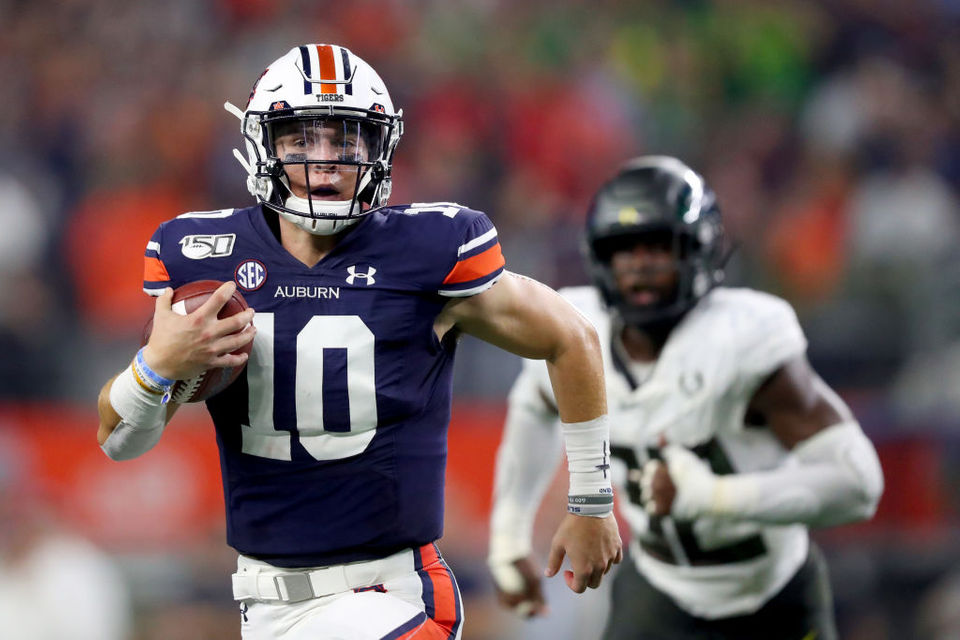 This is a weekly series that will rank the best teams in the country based on their chances to make the College Football Playoff, or, if they fall short, the likeliness that they would reach one of the other major bowl games in the New Year’s Six. Here’s how things stack up heading into Week Two.

20. Cincinnati Shouts out to a legit contender to win the American and grab the Group of 5’s NY6 slot. UCLA is in a real bad place, but back-to-back years with season-opening wins over the Bruins is still a nice accomplishment. Luke Fickell’s return to Ohio State this weekend will tell us a lot about the Bearcats.

19. Houston Falling behind early meant the Cougars were never able to fully recover against Oklahoma, but they showed flashes of why they will still have an electric offense. A much more manageable matchup with Prairie View A&M will help work out some kinks, but that defense is in big trouble with no signs of improvement from last year and a showdown with Washington State looming.

18. UCF Notre Dame transfer quarterback Brandon Wimbush was erratic in his Knights debut, but you can afford that against Florida A&M. The concern for Wimbush is how freshman Gabriel Dillon looked far more composed running the offense in his reps.

17. Oregon The only team on this list coming off a Week One loss earned their spot because the Ducks flashed more than I thought they’d have. While Justin Herbert predictably made some fantastic throws, the power run game was great for 3 quarters, and the defense was flying around and making plays in space for most of the night. It all fell apart because AUBURN JESUS, Y’ALL, but especially if this team gets fully healthy, they stand a much better chance at winning the Pac-12 than once anticipated.

16. Wisconsin I still think QB Jack Coan isn’t the answer for the Badgers long-term, but “give Jonathan Taylor the football on every play” is going to work really well as a gameplan for much of the season. Just ask South Florida.

15. Utah Eventually pulling away from BYU doesn’t change how slow things started. But that’s how the Utes play. It will look real ugly at times until suddenly the game’s over and they’ve won again. Also the rest of the Pac-12 South isn’t exactly making you a believer, is it?

14. Penn State Idaho is not what one would call “a quality football team,” but rolling up 72 points in Sean Clifford’s first start under center is still impressive. Devyn Ford and Noah Cain are going to be quite the freshman backfield duo.

13. Auburn AUBURN JESUS, Y’ALL. If you could try to pinpoint 2 main reasons why the Tigers somehow came back to beat Oregon, it would be: 1) the defensive front seven finally coming to life in the second half after getting bullied by the Ducks early on; and 2) Bo Nix balancing out some real silly decisions with some jaw-dropping throws early on. He has more arm talent, but his decision-making is currently on par with Chad Kelly. If he cleans that up, though? The sky’s the limit.

12. Boise State QB Hank Bachmeier made some terrific plays and little to none of the silly decisions fellow freshman Bo Nix did. Broncos don’t appear have to slowed down much despite a lot of new faces.

11. Notre Dame Struggling at Louisville in game one for the Scott Satterfield regime means Satterfield is definitely a good coach, but it also means the Irish just aren’t as good yet as last year. And this team has a schedule has road games at Georgia, Michigan and Stanford. They’re still in the NY6 because 9-3 with those losses will be enough for an Orange Bowl invite over the slim pickings from the ACC, but they’re not a playoff team anymore.

10. Florida WEEK ZEROOOOOOOOOO was shaky, but unlike the rest of the SEC East, the Gators didn’t play great and still won the opener. Baby steps.

9. Michigan Look closely and you’ll see that the debut of a new offensive staff was a bit iffy. They’ll settle it soon, but will it cost them with Wisconsin, Iowa, Penn State and Notre Dame all on the schedule, before you even get to Ohio State?

8. LSU Joe Burrow doesn’t just lead the nation in completion percentage; he’s thrown more touchdowns than incompletions. Texas is a much stiffer test than Georgia Southern, but the Tigers’ commitment to the spread might actually be real.

7. Texas Not a lot to complain about in the season opener for the first time in 2 years. Louisiana Tech’s not that great, but, once again: baby steps.

6. Washington Jacob Eason was near perfect in his Husky debut, but the big news is that the new faces on defense went out and took it to perennial FCS power Eastern Washington.

5. Georgia The rest of the division is in semi-shambles after Week One, and while not throwing up all over yourself isn’t a high standard, the ‘Dawgs did handily beat a Vanderbilt that shouldn’t stink this year. It’s a nice start.

4. Ohio State Justin Fields started fast in game one in Columbus and then was stagnant the rest of the way. The Buckeyes never gave Florida Atlantic a chance and should ultimately get the job done against Cincinnati, but looking the most lethargic of the playoff contenders is a little bit of a concern.

3. Oklahoma It was magical to watch Jalen Hurts fully unleashed by a coaching staff who let him run a spread offense and taught him how to improve as a passer (stares daggers at Saban). A third straight Heisman-winning QB in Norman is definitively again a possibility.

2. Alabama They were lethargic and still rolled because Tua Tagovailoa threw for 300+ yards and 4 TDs. I’m not even as worried about the incredible influx of youth on the defense, but more concerned on how boring the offense looked when coordinator Steve Sarkisian wasn’t trying to forcibly get the ball to Jerry Jeudy. Tua shouldn’t be boring.

1. Clemson Trevor Lawrence was, admittedly, subpar on Thursday night, and it didn’t matter a lick after a huge night from Travis Etienne. It was a good reminder that Eitenne is a huge key for the Tigers the rest of the season if they do (somehow) get slowed down throwing the ball. The big watch against Texas A&M is how the new faces on the defensive front seven fare against the ever-improving Kellen Mond.