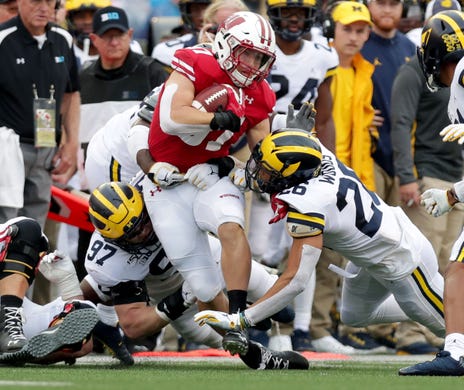 This is a weekly series that will rank the best teams in the country based on their chances to make the College Football Playoff, or, if they fall short, the likeliness that they would reach one of the other major bowl games in the New Year’s Six. Here’s how things stack up heading into Week Five.

20. Penn State No major disrespect to the Nittany Lions, but having road games at Iowa, Michigan State and Ohio State left is a serious challenge, and winning out after that to go 9-3 might still not be enough to get into one of the New Year’s Six.

18. Washington We have to ask who the best team in the Pac-12 is because that team’s going to at least go to the Rose Bowl. It’s not Utah or Arizona State; it’s fairly far-fetched to think it’s Colorado; and (deep, heavy, sad sigh) it’s probably not going to be Washington State. Despite the early loss, the Huskies are getting back to beating the brakes off of opponents, so maybe we were right all along in the preseason.

17. USC …or maybe we just need to go visit an old friend. Offensive coordinator Graham Harrell is a wizard, pulling guys off the street at this point to play quarterback and still lighting up top-tier defenses like Utah. Even if they can’t win the Pac-12, the Trojans getting to 9-3 might be enough to put them in a big bowl.

16. Virginia I can’t stress this enough: a 9-10 win Notre Dame team gets an Orange Bowl bid before the rest of the ACC…but, if the Cavaliers can get to the ACC Championship with one loss or fewer, they’ll either make a real strong case to unseat Notre Dame (especially if there’s a head-to-head win mixed in there after this weekend), or the Irish only win 8 games or fewer, in which case the Wahoos are going to be the best choice to fulfill the ACC’s Orange Bowl contract.

15. UCF Yeah, they lost to Pitt in the waning moments (laughs pretty hard for a while), but winning out from here with at least one Power 5 victory? Their path back to the NY6 is a lot easier than other teams.

14. Cal Justin Wilcox’ culture overhaul means the Golden Bears are now one of the nation’s best defensive teams, but also they can’t ever score enough points to blow somebody out. Seriously, they haven’t won a game by more than 14 points, but Saturday’s 20 points allowed in Oxford is a season high. This might all be a mirage, especially given how tough the remaining schedule is, but if they can navigate it with just one loss heading into the Pac-12 championship game, Pasadena or even another big bowl is absolutely in play.

13. Florida Kyle Trask was fine and that was enough to hammer the Vols, but they’ll need a little bit more than that with Auburn, LSU, Georgia and Missouri in a 6-week stretch looming. Still, if they can navigate that run with only 2-3 losses, it’s gonna be hard to keep them out of a big bowl.

12. Boise State Go ahead, try to knock them off their perch, especially now with a loss for UCF giving them an extra step ahead. It might have been ugly against Marshall and Air Force, but the brand as King of the Little Guys is too strong. Unbeaten Murder Smurfs would get a spot in the Cotton or Orange.

11. Notre Dame Losing a 6-point game at Georgia is not going to keep the Irish from the Orange Bowl, not the way things are unraveling in the ACC. But 2 more losses might be enough, particularly if one of those is Virginia on Saturday, as we discussed above.

10. Auburn Style points might still matter in a playoff argument, but they won’t factor in too much in the NY6 discussion if the Tigers keep winning against such a loaded schedule.

9. Oregon Reports of the Pac-12’s playoff demise may have been greatly exaggerated. We’re kinda just forgetting that the Ducks have only lost to Auburn, and while it was a bit of a slog against Stanford, they’ve been in control of all 3 wins since. 12-1 with a conference championship and a Heisman candidate in Justin Herbert would be obviously be an automatic ticket for Pasadena, but they could honestly also finish as one of the first four out when the current SEC logjam sorts itself out and we get the playoff bracket.

8. Texas Another strong first-four-out candidate. The offense is absolutely on a roll to start the season, and there’s not a lot of opponents left on the schedule who look like they’re going to stop the Longhorns.

7. Wisconsin Outmuscling Michigan is a statement, because that’s what Ohio State has done to finish off the season on top of showing off their superior athletes and speed. The Badgers might make the first Saturday night in December quite interesting if they can get their unscathed.

6. Georgia While they might have one more extra game to earn their spot in the playoff, the ‘Dawgs fall behind LSU this week because, while they’re a fine football team, it probably shouldn’t have been as hard to beat Notre Dame at home as it proved be.

5. LSU The nice thing for Georgia is they beat Notre Dame and it comes early in the year, when you can chalk up the sloppy moments to youth and inexperience still getting settled down. The down side of early-season success? Well, while I think it’s legit, let’s just hope Joe Burrow and the Tigers keep lighting it up.

4. Oklahoma Again this week, a very slight argument about strength of schedule keeps the Sooners right where they are. A higher number of better opponents awaits Ohio State, and thus a chance to better cement its place in the playoff.

3. Ohio State Remember when Miami of Ohio was only down 7-5 on Saturday? Wild (also these rankings reflect what I think the committee will do for the final bracket, but I can’t help but laugh at the idea that Buckeye and Alabama fans would have to interact with each other again, but this time it’d have to be in the desert because they’d play in the Fiesta Bowl).

2. Alabama Henry Ruggs III is real fast. I would like him to play for my favorite football team. That’s it, that’s the blog blurb.

1. Clemson We live in a world where a trip to North Carolina might be the Tigers’ first real non-Texas A&M test, and that’s a real questionable “might.” Like I always say, find joy in the little things in this sport, and never invest in the big things.