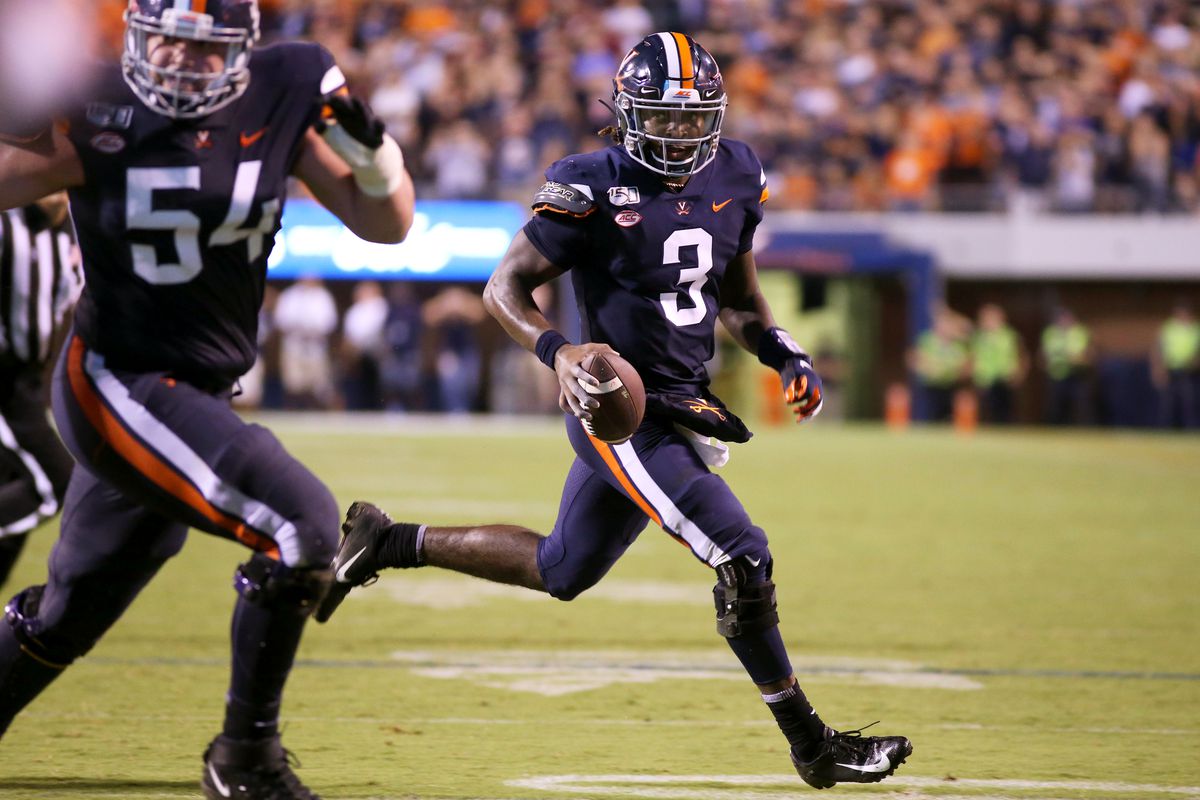 Welcome to a weekly in-season series looking at the coming weekend slate of college football games with observations and prognostications of varying degrees. This week, conference play is in all of your clothes, there’s nothing you can do now.

The 5 Teams with the Next-Best Playoff Shot

Texas There’s really been no slowing down the Longhorn offense, and quarterback Sam Ehlinger is a legitimate Heisman candidate. The struggles of the defense are a sure worry, especially with the injury bug starting to bite it, but they will score enough points to be right in the playoff discussion in November.

Wisconsin The Big Ten West is not going to provide much resistance, and they’ve already proven they can man-handle a team like Michigan. If the only loss is at Ohio State, they’ll still stand a great chance to get in the playoff if they win a potential rematch in the B1G title game.

Georgia Divisions are dumb until you remember how big the SEC is and how everyone isn’t going to play everyone in the regular season and how this leaves the door open for multiple teams with identical conference and overall records. The end result is that there’s a lot of complex math that would make it really dicey to truly put the 2 best teams in the league in the conference championship game. What I’m trying to say is the ‘Dawgs can be the fourth-best team in the SEC and still be a win away from the playoff.

LSU It seems no mortal man can stop Joe Burrow. But there are plenty of tests looming to see just how good the Tigers’ passing attack is. The thing is, if they pass those tests (Alabama in particular)? You’re not keeping them out of the playoff.

Oregon Yeah, we’re not completely done with the Pac-12 and the playoff, not if the Ducks keep winning and Justin Herbert keeps spinning that magic bean. They’ll definitely need help, but it’s not out of the question altogether just yet.

5 Teams with Playoff Dreams That Will Keep Snoozing

Virginia This weekend could make us have to take the Cavaliers kinda, sorta…seriously, at least when we talk about an ACC championship and the playoff. But eeking out wins against a struggling Florida State and Old Do-freakin’-minon at home make you worry about the Wahoos’ chances this Saturday, let alone the odds of staying at one loss or fewer.

Notre Dame Losing by a touchdown at Georgia won’t sink your playoff hopes, but the Irish now have to win out with a hungry Virginia bunch coming to South Bend on Saturday night, and that’s before you get to USC, Michigan and Stanford. It’s too tough a hill to climb.

Florida The Gators are going to stay in the top 10 quite a bit this season just based on the fact that they’ll keep winning when others will slip up. But the winning might get halted shortly, as Auburn, LSU and Georgia are still ahead.

Penn State The Nittany Lions’ playoff hopes may be shot by the end of this weekend if they can’t slow down Maryland. And that’s before you get to Iowa, Michigan and Michigan State all in a row.

Anthony Gordon, Washington State It doesn’t matter if his team lost to UCLA, he’s had an unreal month with 1,894 yards and 21 touchdowns. The question is if, even for the Cougars, the new quarterback can keep up such a pace.

Jamie Newman, Wake Forest The idea of the “September Heisman” is a guy starts fast and then flames out. Not too sure that’s going to happen for the Demon Deacon QB, who looks the part with the eye test and has almost 1,300 yards and 12 TDs to back that up.

Rashod Bateman, Minnesota The Golden Gophers’ 3-0 start borders on fraudulent, meaning we might forget the fast start for the sophomore wide receiver (289 yards, 2 TDs, 19.3 yards per catch). But we shouldn’t, as this is another great September that will carry over into October.

Shane Buechele, SMU The Texas transfer QB is flourishing in Dallas and has a depantsing of TCU in Forth Worth as the latest headline on his resume. But it’s all a matter of keeping it going and giving the Mustangs a shot in the American.

KJ Hamler, Penn State This is a fast start that cannot afford to disappear, as the Nittany Lions need a consistent big-play receiver to keep QB Sean Clifford afloat.

The 5 Most Ridiculous Numbers from UCLA-Washington State

9 The amount of passing touchdowns Anthony Gordon had in a losing effort.

4:20 The span of time UCLA scored 4 touchdowns to cut the deficit to five (also the BLAZE IT number, appropriate for a game where everything was on fire and needed to mellow out just a bit).

14 The exact number of points UCLA had scored in each of its previous games prior to beating Wazzu.

263 The total all-purpose yards for UCLA wide receiver Demteric Felton to go along with 3 total touchdowns (we had more numbers but you get the point, BLAZE IT).

Navy (+10.5) at Memphis It went real bad for the Midshipmen last year, so it’s good to get 2019 started with back-to-back wins. But that doesn’t mean they’re ready to beat an American contender. Memphis 35, Navy 24

Duke (+3) at Virginia Tech This game is on a Friday night and that is the lone reason I choose to acknowledge it. Virginia Tech 31, Duke 27

Penn State (-6.5) at Maryland This game honestly means more for the Terps, as they had a full bye week to stew on the loss to Temple. Are they the unstoppable juggernaut that we saw in the first 2 weeks, or are they simply going to be lost in the shuffle of Big Ten East powers like the Nittany Lions? Let’s assume the latter for the moment. Penn St 38, Maryland 31

Arizona State (+5) at California This game…means something? The Pac-12 seemingly now spins around the Golden Bears, and the Sun Devils are hoping to avoid 0-2 in league play after a 3-0 overall start. Stay up late and watch Justin Wilcox’s nasty defense claim at least one more victim. Cal 28, Arizona State 21

Rutgers (+27.5) at Michigan It’s become a time-honored tradition for the Wolverines to absolutely pummel the Scarlet Knights. But are they even good enough on offense for that? Michigan 31, Rutgers 10

Northwestern (+24) at Wisconsin The Wildcat offense is bad, Pat Fitzgerald is so mad that he doesn’t know how email works, and I am very happy. “Typical letdown game” be damned, even struggles from the Badger offense won’t matter. Wisconsin 31, Northwestern 3

Texas A&M (-23.5) vs Arkansas Something’s wrong with Kellen Mond. Sure, he’s faced 2 great defenses in Clemson and Auburn., but he really hasn’t lit it up outside of the opener. True, the Aggies probably don’t need a big game from him, but it’d be nice to see your star quarterback get back on track. Texas A&M 42, Arkansas 21

Georgia Tech (+9) at Temple Anthony Russo has been another good “September Heisman” contender, lighting up the boards with 944 yards and 10 TDs. He should keep that pace up this week. Temple 35, Georgia Tech 20

Minnesota (EVEN) at Purdue SOUND THE ALARM, OUR FIRST PICK ‘EM OF 2019. That’s not great news for the Golden Gophers, as we continue to ponder if anything they’ve done to start the season is legitimate. Elijah Sindelar is a game-time decision again for the Boilermakers, so looks like we’re going to keep guessing. Minnesota 34, Purdue 31

Wake Forest (-7) at Boston College In college football, the only way you truly get answers to who’s great is in recruiting and on the field. At least in the latter department, the Demon Deacons are quite possibly the second-best team in the ACC. They’ll past a tough road test to further fuel that theory. Wake Forest 38, Boston College 28

Indiana (+14) at Michigan State We’re just going to keep falling back on the Spartans every time we need a ranked team, huh. Michigan St 27, Indiana 14

Mississippi (+37.5) at Alabama Suffice to say, this is not exactly a week rife with great SEC games. Alabama 52, Ole Miss 14

Clemson (-26.5) at North Carolina Mack Brown was seemingly building towards this game with his fast start to the season, but then App State blocked a field goal and, well, you know how that tends to work out. Clemson 42, North Carolina 13

Southern Cal (+10) at Washington The Huskies seem to have found their footing, and that’s why this is a crucial game in the Pac-12. If the Trojans can at least compete for all 4 quarters, we can officially declare Clay Helton’s team “not a mirage.” Or at least “not terrible.” Washington 38, USC 31

Virginia (+12.5) at Notre Dame It says a lot about the state of the ACC that a 4-0 team is still a double-digit underdog at South Bend. The Irish are by no means elite, and the under is definitely the play here because of both teams’ offensive issues, but Bryce Perkins has thrown for less than 900 yards and ran for less than 200 and is still carrying the offense. It’s gonna need to be more than that this week. Notre Dame 28, Virginia 20

North Carolina State (+7) at Florida State The ACC Network’s first year of existence is going to be carried by ‘Noles coverage, as this will be the third time in the last 4 weeks in a row with an FSU primetime game. Here’s the problem: this is a year when the Seminoles are, how do I put this…bad. Good news this week is the Wolfpack are also sub-optimal. FSU 38, NC St 35

Mississippi State (+10.5) at Auburn Bo Nix and the Tigers keep passing every test. Contain Kylin Hill, and this week should be no different. Auburn 31, Mississippi St 14

Kansas State (+4.5) at Oklahoma State This is exactly the moment you’d assume the Pokes will be fine and will roll up a lot of points and cruise to an easy bounce-back victory. But Chris Klieman is a younger Bill Snyder. Even if Okie State wins, it will be ugly, and ugly tends to benefit the Wildcats. Kansas St 31, Oklahoma St 30

Ohio State (-17.5) at Nebraska This line is all about history, because the present tells me the Cornhuskers just barely escaped Illinois last week. The Buckeyes have to start stubbing toes and cutting off their own arms for this to get interesting. Ohio St 45, Nebraska 17

Hawai’i (+2) at Nevada Mountain West weirdness abounds, and it’ll kickoff before 11 p.m. on the East Coast! The Rainbow Warriors are wild and fun, and you already knew that. But they’ve only lost to Washington. Could they also be…good? Hawai’i 41, Nevada 38

Washington State (+5.5) at Utah Incredible clash of styles, and both teams should be hot after losing games they feel they shouldn’t have. The problem here is, it’s starting to strike me that Mike Leach doesn’t really care about winning or losing. Or anything in life, really. Utah 35, Wazzu 28