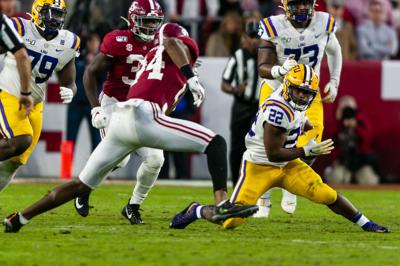 This is a weekly series that will rank the best teams in the country based on their chances to make the College Football Playoff, or, if they fall short, the likeliness that they would reach one of the other major bowl games in the New Year’s Six. Here’s how things stack up heading into Week Twelve.

20. Navy Time to get serious about the race in the American. If Memphis loses on Black Friday to Cincinnati, and the Midshipmen knock off SMU, they’ll win the West division and take on Cincinnati in a winner-take-all game for the American championship and a Cotton Bowl berth.

18. Boise St If the American becomes a jumble of multi-loss teams, the Broncos would likely have a slight edge on App State for the Group of 5 slot in the New Year’s Six.

17. Auburn 2 extremely high-profile teams are coming to the Plains over the final 3 weeks. They’d need chaos to get in the playoff, but 10-2 gives the Tigers a great New-Year’s-bowl resume.

16. Penn St Forget playoff hopes taking a tumble. The Nittany Lions have an uphill battle just to get to the Rose Bowl. Another Notre Dame loss gives them a shot at the Orange Bowl, but they have to get to 10-2.

15. Memphis The road in front of the Tigers is extremely tough, but if they get through it at 12-1, they’re the easy choice for a big bowl from the Group of 5.

14. Utah The committee’s initial playoff rankings seemed to give the Utes the same playoff odds as Oregon. But I’d bet a second loss keeps them out of the NY6 entirely on top of ending their playoff dreams.

13. Baylor The Bears are the ultimate wild card. They don’t have a historic reputation where they could get picked for the New Year’s Six, so the only real path is to the Sugar Bowl by virtue of winning the Big 12. But they’re also undefeated, meaning the playoff is still in play. Like Utah, it seems it’s all or nothing.

12. Cincinnati Everything’s in front of the Bearcats. Win out, and they’re going to the Cotton Bowl.

11. Notre Dame Penn State is probably the chief competition for a big-bowl berth. But 10 wins for the Irish is probably enough.

10. Wake Forest Losing to Virginia Tech hurt, but the ACC Coastal winner will likely not match the Demon Deacons’ resume as long as they go 9-3.

9. Florida Orange, Cotton and Sugar are all in play, but the Gators will get at least one if they win out.

8. Minnesota It is time to accept the reality of the situation: if the Gophers get to the Big Ten championship game at 12-0, they are going to the Rose Bowl at minimum and are a win away from the playoff. Starting your toughest month of the season with a win over Penn State was impressive, and all they can do now is impress more.

7. Georgia Auburn looks like the last major hurdle for the ‘Dawgs before Atlanta. Get to the SEC championship at 11-1, and you’re a win away from the playoff.

6. Oklahoma It wasn’t pretty, but the Sooners held on against Iowa State and stay in the playoff conversation. A second ‘Bama loss and a multi-loss Pac-12 champion likely gets them in, but you have to win out first. They could easily flip-flop with Baylor by this time next week.

5. Oregon Ducks just need to keep winning and hope the committee values their schedule and possible Pac-12 title over Alabama. Tuesday’s rankings will be revealing on that front.

4. Alabama With any other program, all that stuff I talked about above would probably vault Oregon ahead. But not with the brand so closely associated with championship college football. The Tide didn’t get blown out against LSU, and while they will need to win out, that’s enough.

3. Clemson Lotta boo-hooing for the Tigers when they were always destined to move back up the next week because of LSU-‘Bama.

2. LSU The Tigers slayed the dragon. But that doesn’t mean they won’t have to face it again in New Orleans (yes, the championship game is in New Orleans. Yes, just like 2011. Yes, it’s happening all over again. Yes, I’m as sad as you are).

1. Ohio St The Buckeyes have been so good in every aspect and didn’t slow down against Maryland (I know this is a terrible thing to ask, but root for the Bucks going forward, as they might be the biggest thing standing in the way of repeating 2011).