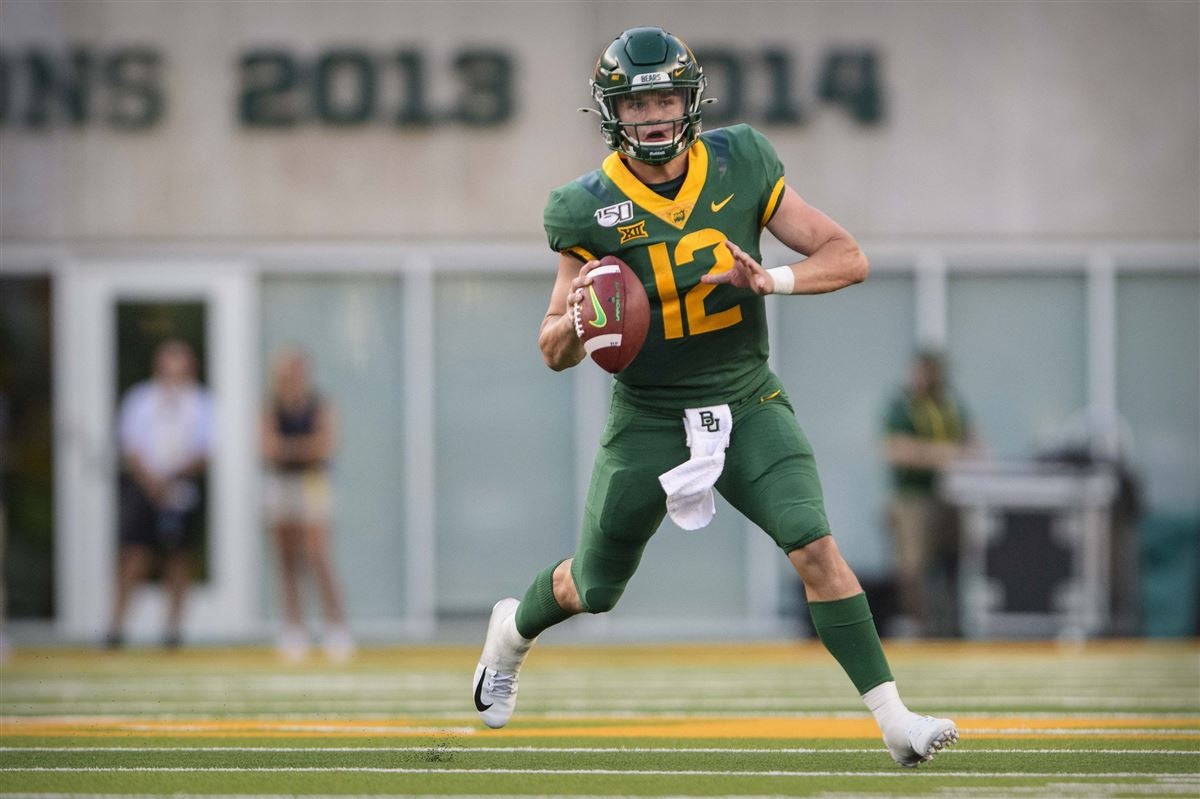 Welcome to a weekly in-season series looking at the coming weekend slate of college football games with observations and prognostications of varying degrees. This week, we’ve still got plenty of big games and a lot to determine, but let’s consider what we know right now.

The 5 Most Surprising Teams

Minnesota Plenty of smart people thought the Gophers could win the Big Ten West. But being a playoff contender? Not a chance.

Louisiana Tech Conference USA looked like it would again be ruled by UAB and FIU. But while FAU has returned to its place back atop the East division, the Bulldogs have come out of nowhere in the West and are 8-1.

Air Force They can’t win the Commander-in-Chief’s Trophy, but I doubt many thought the Blue Falcons would manage to start 7-2.

Indiana Michigan and Penn State loom, but that means the Hoosiers can still go 8-4, which would be shocking enough.

The 5 Most Disappointing Teams

UCF The Knights seemed to have gotten back on track the last 3 weeks, but then they lost to Tulsa. 9-3 is not a bad season, but it’s not close to sniffing their intended destination of the New Year’s Six.

Utah St The Aggies have one of the nation’s most underrated quarterbacks in Jordan Love, but they’d lost three of the last 4 games prior to escaping Fresno State.

Washington It’s true that Oregon emerged as a challenger in the Pac-12 North that many didn’t think the Huskies would have to deal with. But the losses to Cal and Stanford are inexcusable.

Houston The loss to Tulane seemed to push a slow start over the edge. The good news? The Cougars acted quick and started handing out redshirts, so they’ll have another chance for a big season next year.

Syracuse From an Orange Bowl favorite to winless in conference play. No one had higher expectations and fell further than the Orange.

The 5 Silliest Conference Winners that can Still Happen

UCLA The Bruins upsetting Utah this week puts them in a tie for first place in the Pac-12 South, and they’d be able to win the division outright when they play USC. Somehow, Chip Kelly has manage to keep this team afloat after going winless in conference play.

Hawaii The Rainbow Warriors still have a meeting with division leader San Diego State to come next week. If they win, they may very likely punch their ticket to the Mountain West championship game.

Oregon St If Oregon found a way to lose the next 2 games, the Beavers would have a shot at the Pac-12 North in the Civil War. While it’s definitely not happening, the fact we’re talking about OSU doing any kind of winning is already pretty silly.

Temple Another UCF loss moves the Owls into second place in the American East, and if they hand Cincinnati one of a potential 2 losses, they claim the division. Remember, for all the good like the upset of Maryland, this same team lost by 6 touchdowns to UCF.

Texas Oklahoma has to lose twice and the ‘Horns have to win out, but put preseason expectations aside for a minute. The UT defense has been so bad this year that it would feel like a minor miracle if they got to 10-3.

5 ACC Teams that can Still Make the Orange Bowl

Wake Forest The loss to Virginia Tech hurts, and Clemson is looming this weekend, but 9-3 is going to be the best a lot of the other teams in the conference will do. The Demon Deacons are likely still in the driver’s seat.

Virginia If they can finally win the Commonwealth Cup, the Coastal is theirs, as well as a leg up in the Orange Bowl race.

Virginia Tech The Hokies are not nearly as good as seasons past, and yet they’re on track to win the Coastal. This division has achieved new levels of suck.

Pitt 9-3 is still possible. When things get stupid, never doubt that Pitt will be at the center of it.

Miami If they go 8-4, the Orange Bowl probably can’t resist the idea of selling tickets to the home crowd (even if they won’t show up).

North Carolina (+4.5) at Pittsburgh The ACC Coastal is going to come down to the Commonwealth Cup. But continuing to win makes you appetizing for the Orange Bowl. Let’s take Mack Brown to beat at least one expectation and score a big win for bowl eligibility. North Carolina 34, Pitt 31

Louisiana Tech (+2.5) at Marshall A potential Conference USA championship preview, but there’s a long way to go and the race has been chaotic. The Thundering Herd are going to throw an extra dash of chaos in there. Marshall 35, LA Tech 34

Kansas (+17.5) at Oklahoma State The Cowboys are probably the most confusing team in the playoff rankings, as their lone signature win is against Kansas State. But that’s not going to really matter this week. We know the Pokes move the ball well thanks to Chuba Hubbard, and they’re facing a porous Jayhawk defense. Oklahoma St 49, Kansas 28

Florida (-7) at Missouri The Gators have thrown up some stinkers in recent years against the Tigers. But even with Kelly Bryant’s return, the offense has been so bad for MU during their 3-game losing streak that UF should be able to win a slugfest. Florida 27, Mizzou 14

Wisconsin (-14.5) at Nebraska The Badgers still have life in the Big Ten West, so they’re not throwing away that opportunity. Also, be honest: why would you trust the Huskers at all? Wisconsin 24, Nebraska 14

Michigan State (+13.5) at Michigan The Wolverines are doing their traditional “clicking in late October/early November” thing under Jim Harbaugh, and Sparty just doesn’t do anything consistently well on offense. Michigan 24, Michigan St 10

Alabama (-19) at Mississippi State Angry Saban is the Saban most likely to throttle you, especially when you’re lacking talent like the Bulldogs. Alabama 49, Mississippi St 17

Indiana (+14.5) at Penn State Of the 2 games over the next 2 weeks, this is the one that the Hoosiers have to play on the road. But if #9WINDIANA is to become reality, this is the more beatable opponent. The Nittany Lions showed their flaws on defense against Minnesota, and backup QB Peyton Ramsey is extremely capable. If the wheels were going to come off for PSU, this is the time. Indiana 31, Penn St 28

West Virginia (+14) at Kansas State Even in defeat, the Wildcats made Texas work for it down to the final seconds. Chris Klieman should be in Coach of the Year conversations. He’s built a winner right away. K-State 31, West Virginia 14

Wake Forest (+34.5) at Clemson They might have thrown up a dud against Virginia Tech, but the Demon Deacons are the best team that the defending champs will see in ACC play. QB Jamie Newman has been sensational, but the Deacs took a hit with the loss of start receiver Sage Surratt. That will be enough to keep them from getting too close. Clemson 45, Wake Forest 21

Navy (+7) at Notre Dame First time in a while these old rivals are playing an on-campus game, and certainly the first time in a long time they’re both ranked. The option is tough to shut down, but not only are the Irish prepping for it every year, they’ve been solid enough against the run, yielding less than 4 yards per carry. Notre Dame 28, Navy 27

Memphis (-10) at Houston The Tigers can’t afford to get tripped up, and the offense won’t slow down. But the Cougars score enough points every week that they’ll hang around. Memphis 45, Houston 38

Georgia (-2.5) at Auburn It doesn’t bode well that the ‘Dawgs still seem stymied on offense despite their 4-game win streak. The Tigers will be perhaps the best defense UGA sees all year, and despite Jake Fromm and D’Andre Swift doing all they can, I don’t think the offense busts out. The good news? No Boobie Whitlow again for War Eagle makes them completely vulnerable to losing a slugfest. Georgia 28, Auburn 27

Texas (+7) at Iowa State There’s probably no better 4-loss team in the country than the Cyclones, whose combined margin of defeat is 11 points. They’re going to make the Longhorns work for it, and Brock Purdy should make enough throws at home to finish what he couldn’t against Oklahoma. Iowa St 35, Texas 31

Minnesota (+3) at Iowa Against Wisconsin, the Hawkeyes never slowed down Jonathan Taylor, meaning when the Badgers did throw off play action, they had success. If the Gophers get Rodney Smith going much better than he did against Penn State, Tyler Johnson and Rashod Bateman are going to have plenty of opportunities to put on another show and keep rowing the boat. Minnesota 31, Iowa 24

Appalachian State (-16.5) at Georgia State The Mountaineers making the playoff rankings means they still have a shot at the New Year’s Six. But they’ve got to get by a Panther team that’s been one of the Sun Belt’s surprises this season. Even if it’s not pretty, they’ll keep on rolling. App St 35, Georgia St 21

Louisiana State (-21) at Mississippi In year’s past, this is a game that trips up the Bayou Bengals. Maybe the Rebels put together a couple of good drives. They’re not slowing down Joe Burrow. LSU 49, Ole Miss 24

South Carolina (+10.5) at Texas A&M The best unranked team in the country? That would be the Aggies, and they’ll join the playoff’s rankings after dispatching of the Gamecocks. Texas A&M 38, South Carolina 21

California-Los Angeles (+21.5) at Utah The Bruins are somehow a win away from first place in the Pac-12 South, but while they won’t dominate the game, the Utes are not giving up their newly-renewed playoff hopes. Utah 24, UCLA 10

Cincinnati (-14) at South Florida Will the Bearcats get tripped up? The Bulls made Temple work for it, but as long as Michael Warren and the run game keep trucking, Cincy’s going to keep getting the job done. Cincinnati 35, USF 17

Oklahoma (-11) at Baylor This is the Bears’ moment. Either they prove they deserve a playoff shot or it all goes up in smoke. The defense has been suffocating, and the run-first approach from Matt Rhule means BU can hammer away as Kansas State did if they take an early lead. But I’m not sure Jalen Hurts will let the Sooners fall behind too much, and the Bears don’t really have a one-on-one answer for CeeDee Lamb. Oklahoma 35, Baylor 28

New Mexico (+28) at Boise State The Broncos had to hang on for dear life against Wyoming. The Lobos are not going to provide such theatrics. Boise St 45, New Mexico 14

Arizona (+27.5) at Oregon The Ducks are agonizingly close to getting into the playoff, so the goal down the stretch is to take care of business in style over the final 3 games. The Wildcats limp in, so that shouldn’t be a problem this week. Oregon 49, Arizona 17