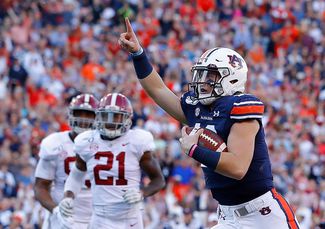 This is a weekly series that will rank the best teams in the country based on their chances to make the College Football Playoff, or, if they fall short, the likeliness that they would reach one of the other major bowl games in the New Year’s Six. Here’s how things stack up heading into the conference championships.

20. Cincinnati The race for the Group of 5’s spot in the New Year’s Six is basically over, but if the Bearcats beat Memphis and get upset losses by the other 2 major contenders, they’d be able to snag that slot.

19. Auburn Is there a better 3-loss team than the Tigers? Probably not. Is it enough to get into a New Year’s bowl? Also, probably not.

18. Memphis The fluctuation with these Tigers’ ranking could be wild. They either end up in the Group of 5’s top spot or stay down here. The good news? All they have to do is beat Cincy again and they’re off to the Cotton Bowl.

17. Wisconsin The Rose Bowl is waiting with an upset in Indy now that the Badgers have reclaimed Paul Bunyan’s Axe in dominating fashion.

16. App St Like Cincinnati, the Mountaineers need a win and some help Saturday to get to a big bowl. But the fact they still have a shot makes them one of the most successful teams in Sun Belt history.

15. Notre Dame The Irish’s fate, like so many others, is tied to the result in the Pac-12 championship game. A Utah win opens up another NY6 slot, one they can absolutely still slide into.

14. Minnesota On one hand, longtime rival Wisconsin dashed the Gophers’ Big-Ten-title and playoff hopes in a beatdown. On the other, should the Badgers lose the extra game they now have, Ski-U-Mah would finish with less losses than Bucky and the same record as a Penn State team they’ve beaten head-to-head. The door to the Rose Bowl is still slightly ajar.

13. Utah I think it’s completely fair to say that, should LSU handle Georgia as expected, the Utes just have to win the Pac-12 title game to make the playoff. But expecting them to beat Oregon has not been in the cards for a while now, and while they certainly handled Colorado, I’m not yet swayed they’ll get the job done in Santa Clara.

12. Boise St At the end of the day, it’s an incredibly difficult thing to beat the same team in back-to-back weeks. Memphis has to do that to get the Group of 5’s top spot, and until they actually pull it off, it’s best to bet on the Broncos to again represent the little guys.

11. Virginia Maybe Wake Forest slides in and ends up taking the ACC’s spot in the Orange Bowl. But it would sure seem like the Cavaliers finally vanquishing Virginia Tech and winning the Commonwealth Cup has punched their ticket to Miami.

10. Baylor Like Memphis, there could be some serious change in the Bears’ final standing. They are not dead in the playoff, and there’s still have a path to the Sugar Bowl if they lose the Big 12 championship game. Utah’s fate the night before will determine if they’re heading to New Orleans or to the Alamo Bowl.

9. Florida Chaos can not ensue thanks to the Big 12, so we’ll simply have to daydream about how strong the Gators’ case might have been in a world where the last playoff spot had to go to a 2-loss team.

8. Georgia No one has a worse loss among the remaining playoff contenders than the ‘Dawgs home meltdown against South Carolina. No playoff contender has looked less impressive, either. UGA should be forever grateful to Auburn.

7. Penn St No, I still don’t understand the committee’s infatuation with the Nittany Lions. But I’m doing more predicting at this point, and they can’t lose again. They’re likely locked in to the Rose Bowl barring a Wisconsin win in Indy.

6. Alabama Just because we won’t see them in the playoff for the first time doesn’t mean they won’t finish close. Plus, they’re probably headed to the Orange Bowl. Enjoy the angry death machine, Virginia.

5. Oregon The loss to Arizona State is going to show how much it hurt right when the season ends, when the Ducks are just on the outside looking in.

4. Oklahoma It’s pretty simple for the Sooners: Oregon wins, and they’re playing Baylor in a playoff quarterfinal with a trip to Atlanta on the line. Utah wins, and the best they can do is the Sugar Bowl.

2. LSU The Tigers have to eliminate Georgia, so they have some reason to be playing this weekend and trying to win. After that, it’s off to the desert for what should be an all-time great Fiesta Bowl.

1. Ohio St Hot take: the Buckeyes have secured their playoff spot and have nothing to play for in the Big Ten championship. They won’t approach it like that, and they’ll have a month off before the semifinals, but there’s nothing that can be gained from winning Saturday except getting the top seed and playing closer to home in the Peach Bowl.